The Croods Wiki
Register
Don't have an account?
Sign In
Advertisement
in: Animals, Invertebrates, Bears,
and 3 more

Their name comes from the words Bear (A kind of mammal, typically omnivorous) and Pear (A kind of fruit) which the both of these words rhyme.

Head-Their heads are extremely round and dwarf the rest of its body in size. They are extremely small especially when compared to other ursids and are similar in life style and appearance to that of the Bush Baby Lemur. They possess wide mouths which they can close to look much smaller and possess elongated serrated fangs throughout their mouths rather than more omnivorous teeth like modern bears. Their snouts are short and pointed, bending upwards and tipped with a small padded nose. Their ears are short and rounded and can fold onto the sides of their head.

Their eyes are large and round and red in color with large pupils to match.

Their necks are short to non existent and run into their rectangular bodies seamlessly. The contrast from head to body ratio give them the appearance of a pear or other form of fruit in order to camouflage into their environment.Their legs are short and are tipped with 3 clawed fingers and toes.

Their tails are long and prehensile and covered in short fur allowing them to hang on to the roots of trees similar to modern day opposums.

Coloration-They possess dark brown spots around their eyes, eyelids, and in various areas of their bodies. They possess white markings across their brow, down their snout, and around their mouth. Their body, tails, legs, arms, and head are yellow in color. Their bellies are cream colored and their tail possesses brown stripes.

The Bear Pear are small predators that live within jungles underneath the roots of various trees.

The Bear Pear is highly social and live in packs, all hanging upside down and sleeping together similar to modern bats. They are nocturnal and sleep during the day using the roots for shade to allow them to look around if needed. If a foe is detected by them they will watch it collectively, only moving when the foe is not looking at them and watching it as it moves past them. If the foe turns to look at them they will swivel around so their backs are facing them so as to not raise any alarms of the foe. If they need to they will intimidate the foe by bearing their fangs and making eerie ringing noises.

The Bear Pear is a carnivore which hunts at night, preying upon smaller animals.

Their predators are the Macawnivore and the Turkeyfish who prey upon them if they are not camouflaged, however they may figure out that the Bear Pear is not in fact a fruit and may prey upon them.

Sound Emission-The Bear Pear can emit sounds similar to that of gourds or even make eerie ringing sounds when needing to intimidate foes.

Camouflage-They possess nearly perfect camouflage allowing them to trick most opponents into either leaving them alone or being attacked by them.

Stamina-They possess a high amount of stamina allowing them to hang from their tails for long periods of times.

A family group of bear pears is seen briefly in the movie when Thunk brushes against them. They watch him from behind, baring their fangs, but quickly turn around when he looks. Thinking that they are just pears, he keeps walking as a single baby bear pear keeps watching. 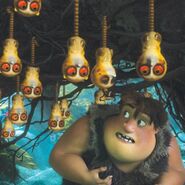 A render of a bear pear