The Croods Wiki
Register
Don't have an account?
Sign In
Advertisement
in: Male, Animals, Croods,
and 3 more

Belt is a three-toed sloth who belongs to Guy. He is normally seen around Guy's waist, used as a 'Belt' to keep his pants up. Before the Croods came along, Belt was Guy's only companion. Guy mentions that he has had several belts in the past but never tells us where they went. It is assumed that they passed due to old age or lack of food. Guy's new relationship with belt is strong. They will both interact, and Guy will even talk to and understand Belt at times. Belt loves to help Guy with things and emphasizing certain moments, like adding a "Dun dun daaa homie!" to intense moments or if something bad is about to happen.

Belt is a sloth of many talents, including "cook, conversationist, navigator" etc.

Belt Crood might be its new full name by the conclusion when it joins the family.

Belt has red fur with a peach-toned face. He has big turquoise eyes, and hangs around Guy's waist with his long arms acting, true to his name, as a belt. Has a long nose. 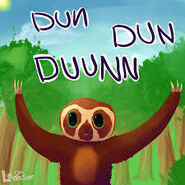 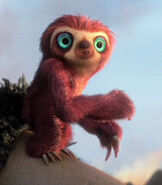 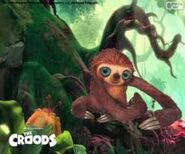 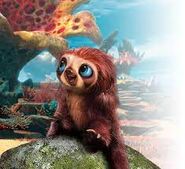 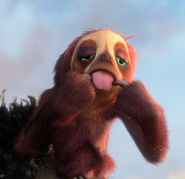