The Croods Wiki
Register
Don't have an account?
Sign In
Advertisement
in: Male, Humans, Croods,
and 4 more

Guy is the tritagonist of The Croods. He is a wandering nomad who once lived with his own family until they died from sinking into a tar pit and his only companion has been his trustworthy pet sloth named Belt ever since.

Guy is a handsome tan-skinned boy with messy medium-length brown hair that is tied in a small ponytail on top and wide dark brown eyes.

He wears gray pants (held up by Belt the sloth) with bear skin shoes that make him look like he has paws for feet, a necklace with three seashells on it, he has wrappings on his arms and red stripes painted on his torso and biceps.

When Guy first makes his appearance, he is dressed in a boar creatures skin that he is no longer seen with (as he left it behind when he went to go save Eep Crood from a swarm of Piranhakeet) throughout the movie.

When Guy meets the Bettermans, his appearance has drastically changed as he no longer has the red stripes on his torso/biceps and he has the same outfit/hairstyle that is similar to Phil Betterman.

When he, Phil and Grug Crood gets kidnapped by Punch Monkey, Guy has his hair tied in the same small ponytail and loses the top but he still wears the pants, slippers and necklace.

Guy is a Cro-Magnon (aka:Homo sapiens )[1], clearly evident in his straight posture, creativity and lack of Neanderthal strength or savagery. He is not as strong as the Crood family and is not part of the Croods' family, although he more than makes up for it with his intelligence and creativity, making and using various inventions, coming up with ideas, and eventually discovering how to make fire. He also used to think the Cavies (aka: Neanderthals) were savage brutes, although he was not aware Eep Crood was one when he first met her, but he manages to bond with all the Croods throughout the film.

It is shown that Guy loves to explore and come up with new things because before his family died in a tar pit - his parents told him to never hide and to never be afraid of the unknown.

In The Film Series

Guy first meets Eep Crood when she leaves her cave where he then shows her his campfire and tells her about his ideas and about The End,- he then quickly leaves but not before he gives Eep a conch shell horn to call him in case she needs him. After the Croods' cave is destroyed by an earthquake, they begin their journey to search for a new cave where they eventually run into some trouble. Eep then uses the horn to call him and he manages to save them with his fire torch. When the Croods find out he knows how to make fire (which frightens off dangerous animals and keeps away the darkness), Grug shoves him into a hollow log and forces him to accompany them until they find a new Cave. To Grug Crood's fear, Eep and Guy begin to have a romance as Guy shows Eep what the outside world has to offer. Guy realizes that he has fallen for Eep when they stare into each others eyes and when Guy is telling a story. Grug most likely dislikes Guy for this because it breaks rules that he has kept to keep his daughter alive and safe. Unfortunately for Grug, Eep and Guy fall for each other even when Grug tries to interfere when they're having a special moment. They never end up together in The Croods but are seen to get together in Croods 2

In the movie trailer, it is confirmed that Guy is shown to be proposing to Eep Crood with a promise rock. At the end of the movie, Guy and Eep are shown moving into their own bedroom on the Betterman's land.

In Dawn of The Croods

Guy with Eep Crood in Dawn of the Croods 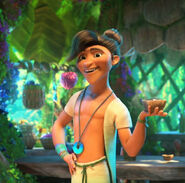 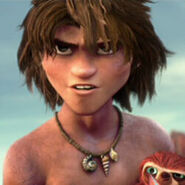