The Croods Wiki
Register
Don't have an account?
Sign In
Advertisement
in: Animals, Mammals, Omnivores,
and 3 more

Their name is the combination of the words Jack Rabbit (A species of rabbit) and Bat.

Head: Their head is ovular in shape with and is extremely flat on the dorsal and ventral(Top And Bottom) sides of it. They possessed wide mouths with serrated teeth and elongated canines for cutting open flesh and allowing it to drink the blood from the wound. They possess short snubbed noses tipped with a rounded triangular fleshy nose flat with enlarged nostrils. They possessed short tongues within their mouths which was primarily used to lap up blood.

Eyes: Their eyes where small with white sclera and black irises and pupils.

Ears: Their ears are extremely large and teardrop shaped with fur running along the sides and back of them. Unlike modern bats, they possessed the ability of full range of motion with these ears even being able to cover their face with them, which may give them an advantage to keeping the sun out of their eyes, however at the cost of being able to see and therefore fly.

Body: Their body is more similar to that of rabbits than that of bats with the exception of their wings. They possess little to no neck which fades into their bodies quite easily. Their bodies where rectangular in shape and where quite plump. Their forelimbs where specialized for both walking and flight, being short and stumpy wing length wise with a total wingspan of 18 Inches or 45.72 Centimeters, however it was quite muscular arm wise. Their wings where made from all of their four fingers unlike modern bats which possess a wing thumb for gripping things and hanging on to things. The Jackrobat has seemingly gotten past this weakness by developing its wings to also be functional arms for grasping and clinging to things with each wing finger being tipped with a claw. Their fingers where connected by a thin skin membrane allowing it to function as a wing and fly or glide. Their hind legs where much simpler and where similar to that of a modern rabbit, possibly allowing the animal to hop around better than modern Vampire Bats.

Tail: Their tails where much more similar to that of a rabbit being short, stumpy, round and like a puffball.

Pelt: Their entire body was coated in a short fuzzy fur which was thinner around the eyes and thicker on the tail. The insides of their ears and wing membrane was also completely devoid of any fur at all. The Jackrobat also possessed fur down each of its wing fingers which is unique to this species.

Coloration: Their heads, wrists, wing fingers, wing membrane, and knees where purple in coloration with purple stripes down its back. Its body and hind legs where colorized by a rusty reddish brown which was broken up by its stripes and its white underbelly, hind paws and tail. which had the same rusty red color go down it from the base in a teardrop shaped stripe. It also possessed a lighter purple around its eyes.

Height: The Jackrobat has been measured to reach a height of 12 Inches or 30.48 Centimeters.

Weight: The Jackrobat comes in at a weight of 3-5 Pounds.

Lifespan: The Jackrobat is able to live for around 9 years in the wild similar to that of the modern Vampire Bat.

The Jackrobat lived within deserts, grasslands and underground caves and at night are very common to be seen flying through the sky.

The Jackrobat was highly social and would live in large flocks, working together to gather food. While it is more common to see Jackrobat flocks at night they at least one known group has worked together during the day, working together to try and get the Ramu Egg from the Croods Family. They where highly aggressive towards other animals and would flock together similar to that of the Piranhakeet. During the day they would have a scavenger lifestyle and would be opportunistic, feeding on anything edible to them, while during the night they would primarily be stealth feeds, sneaking up on their prey and feeding on it similar to modern Vampire Bats. They are also quite cowardly as if they are startled they will leap into the air and take flight to get away quickly. They are also easily disturbed by loud noises such as when the Croods Family was arguing on their road trip and will prioritize not having to hear these noises to even sight which can result in them hitting random objects.

The Jackrobat fed mainly on liquids as they would primarily feed on blood from that of the Impalamingo and Punch Monkey or would even steal eggs from birds such as the Ramu and would feed on the yolk of it. This is unlike the modern Vampire Bat which feeds entirely on blood, making the Jackrobat much more of a generalist.

The only known predator of the Jackrobat is that of the Bear Owl.

Agility-Due to their muscular legs the Jackrobat is able to leap into the air very high which can allow them to almost instantly attain flight, giving them an advantage against most adversaries.

Flight-The Jackrobat possesses the ability to fly similar to that of modern Vampire Bats and is able to glide for extended periods silently.

Echolocation-The large ears of the Jackrobat allow it to echolocate with suprising accuracy, and can allow the Jackrobat to pinpoint its prey from even 1 Mile or 1.7 Kilometers away.

High Mobility-Due to the unique shape of their wings they are able to both fly and cling to objects and the wings are strong enough to aid it in stealing food from an adversary which already has it in their hands even if it is much larger than them.

A flock of Jackrobats was seen trying to take the Ramu egg away from the Croods Family during the opening of the movie, even chasing after them. This flock eventually dispersed once the Bear Owl was woken up.

Another individual was seen in the grasslands the Croods Family was travelling through and folded its ears over its head in order to not hear them arguing resulting in it hitting a rock. 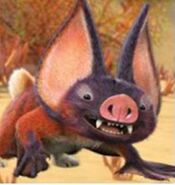 An average specimen of the Jackrobat

An info sheet on the Jackrobat

Another info sheet on the Jackrobat 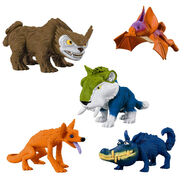 A toy of the Jackrobat