The Croods Wiki
Register
Don't have an account?
Sign In
Advertisement
in: Animals, Bears, Mammals,
and 2 more

Krispy Bear is a fictional female bear made up by Grug Crood for one of his gruesome stories to keep his family from leaving the cave. She dies at the end of the story after seeing something "new", and Grug tries to make the Croods loathe new materials, and life. Grug also made a teddy bear based on Krispy which he gave to Eep as a child and then passed on to Sandy.

Kripsy Bear was most likely Grug's attempt to get Eep to follow the one rule, "Never leave the cave", even though Eep clearly ignores this. Guy, Ugga, and Sandy seem to be surprised at the story, even though they hear it all the time, while Gran just says "Same story as every day."

Krispy apparently died differently each time Grug had told the story, hence the red ichor paint stained on the walls with a somewhat bear figure and a red "bloody" hand. 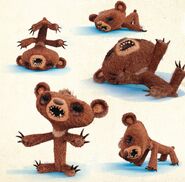 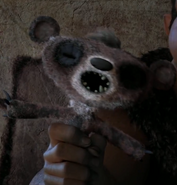