The Croods Wiki
Register
Don't have an account?
Sign In
Advertisement
in: The dawn of the croods, Humans, Characters, Male

Munk is a recurring character who appears in Dawn of the Croods. He is Grug's best friend and colleague. He lost his family a long time ago; a running gag in the series involves him trying to find them. He is also very forgetful.

During Go-Sip Girl, it's mentioned by Ugga that he "fell" for Teena

His sister Gunk is shown in Super Smash Siblings.

Grug made him Valley Leader in the series finale. 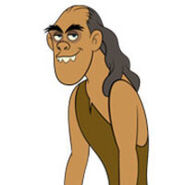