The Croods Wiki
Register
Don't have an account?
Sign In
Advertisement
in: Animals, Mammals, Hebivores,
and 4 more

Punch Monkeys are a species of arboreal primate that lived during the croodaceous time period.

The name comes from the words Punch(to hit someone with a closed fist) and Monkey(A species of primate identified by possessing a tail).

Head-The head of the Punch Monkey is blocky while having a domed rounded head. They possessed hairless areas around the mouth, eyes and ears. They possessed wide mouths filled with omnivorous teeth similar to modern Monkeys with smaller canines. Eyes-They possessed very intelligent eyes with a white sclera, amber iris and black pupils and the eyes where around average size.

Ears-They possessed hairless round ears similar to that of modern Monkeys.

Body-They possessed very stocky bodies with little to no neck. They possessed very muscular shoulders with thick upper forearms which are dwarfed in size by their very large lower forearms and hands which possessed 4 hairless fingers and an opposable thumb. Their fists are extremely thick suggesting a layer of fat under the skin which would act as a cushion allowing for the Punch Monkey to not damage their own fists with their punches. Their body tapers off near the rear with shorter skinnier legs tipped with hand-like feet.

Pelt-Their fur is extremely scruffy with the exception of the hairless areas as well as the top of the head which possesses a thicker amount of fur.

Coloration-They possessed a blueish-black fur color on most of the body with black markings on the forehead. The skin around their eyes is bright pink in contrast to their lips which is light blue. Around the facial skin, the belly, and half of the tail is creamy white fur with orange patches on the shoulders, chest and a band across the middle of the tail.

Lifespan-The Punch Monkey lived up to 25 Years similarly to that of a modern Rhesus Monkey.

The Punch Monkey lived in trees within Jungles.

Punch Monkeys where highly aggressive primates who lived in highly social troops together, typically in a singular tree in one family. Punch Monkeys may form super colonies occasionally which can be comprised of multiple different subspecies of Punch Monkeys. They communicate via a very physical form of language, similar to sign language, however it consists mostly of punches, kicks, and slaps. When attacking an opponent the entire troop may join in rather than simply letting one of them handle the opponent. When not engaged they are very relaxed with seemingly no display of fear towards most animals even when they are attempting to intimidate them. Punch Monkeys may be tamed or bribed via giving them fruit allowing the briber to move through their territory without fear.

The Punch Monkey similar to most primates where Frugivores, a kind of omnivore that mostly eats fruits. They preferred sweet fruits, such as bananas, and would also consume insects similar to modern Monkeys.

There are few known predators of the Punch Monkey such as the Koaleopard and the Macawnivore, the last of which is mostly implied as they displayed fear when spotting it and even retreated unlike how they behaved when crossing a ravine full of Land Sharks which they displayed no fear at all towards.

High Attack-Due to their padded fists and muscular arm build they are able to punch with an extreme amount of force and show no pain at all, even with multiple punched being done.

High Climbing Speed-The Punch Monkey is able to climb trees at high speeds in order to evade predators or even get in new areas to aid in attacking an opponent.

Limb-Like-Tail-The tail of the Punch Monkey is extremely prehensile which allows them to use it similarly to that of a fifth limb.

High Reach-Due to their arm length and shape they possessed a reach longer than that of most modern Monkeys of similar size.

High Intelligence-They have displayed a high amount of intelligence as shown through their complex language and social structure as well as their ability to understand friend or foe and work together to apprehend opponents and defeat them.

A troop was seen during the first movie which fought against Grug Crood and where able to dispatch him easily and even toy with him. They later disperse upon Chunky appearing behind Grug. A second troop was seen later in the movie which where prepared to fight Grug, but they were bribed to let them pass by Guy Crood giving them bananas.

A singular member was seen during the road trip trying to plug its ears with its fingers.

A super colony is seen kidnapping Grug Crood, Guy Crood and Phil Betterman. They also learned how to make tools, make fire, and tie better knots, unintentionally having been shown how by Phil, who, in his own words, believed that the punch monkey's knots were terrible. The punch monkeys are about to sacrifice the three, dressed as bananas to a giant Spiny Mandrilla but the Thunder Sisters (composed of Gran, Eep, Ugga, Thunk, and Sandy Crood, alongside Hope and Dawn Betterman) were able to rescue them. They become neighbors with the families at the end, sharing the bananas with each other. 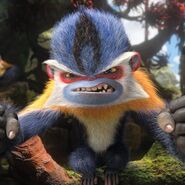