The Croods Wiki
Register
Don't have an account?
Sign In
Advertisement
in: Animals, Birds, Carnivores,
and 3 more

The Turkeyfish are large predators that resembles a blue and purple ostrich with fins and enormous fangs at the end of a gharial-like beak.

They are apparently oviparous, with a single father defending an egg mercilessly against scavengers such as Liyotes. The egg doesn't need to be kept warm by the parent, and can hatch on its own. Because of this, a male turkey fish will pursue and court females even if he already has an egg.

They use their dextrous talons to catch prey such as the Trip Gerbil, and are apparently easily angered.

One is seen in the middle of the movie, guarding its egg and easily evading capture by Thunk and Grug. Later, it attacks Eep and Guy after they failed to attract it with a model of a female turkey fish (though it bought it initially). When they get tangled together, their puppet accidentally smacks the turkey fish in the face, prompting an immediate and violent reaction. The turkey fish grabs the puppet's head in its teeth and shakes it around, then flings it away and pursues Eep. Most likely assuming that she would be clumsy and slow like Grug and Thunk, the turkey fish underestimates her cat-like agility and is lured into a trap previously set by Guy. The trap launches it straight up into the air and sends it plummeting to the earth again, killing it and providing a massive, primitive equivalent of a turkey dinner for the Croods. 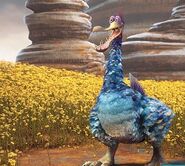