The Croods Wiki
Register
Don't have an account?
Sign In
Advertisement
in: Female, Humans, Croods,
and 3 more

Ugga Crood, née Stonewell, is Matriarch of the Croods who has the hard job of keeping her family alive.

Grug's mate. She's every bit as solid and sure as Grug, but over their many years of raising their children together, Ugga has always deferred to her husband's authority. When she suddenly finds herself in the position of being a cave-wife with no cave, Ugga is forced to make the right decision for her family -- even if that means changing the way they live.

Ugga has neck-length chocolate colored hair that she keeps back with a worn cloth to keep her hair out of her eyes, but she lets loose into curls to reveal she has bangs swept on the left side later on in the movie, hazel eyes and her medium-sized nose isn't as big as Grug's or Sandy's.

She wears a white striped dress that only goes over her right shoulder. Her skin is a little tan and her clothing is possibly a snow leopard's skin.

Ugga is a little more open-minded than Grug Crood, but keeping the family safe stops her from trying new things like Eep Crood does. She's the caregiver of the family, making sure everyone is clean and healthy. Whenever there's trouble, her mother instincts will take over, and she will do whatever she can to fix it.

Later on in the film, Ugga has her own idea and uses it to protect herself, her mother and her baby girl Sandy from giant carnivorous flowers. This is a turning-point for Ugga as she literally and figuratively starts letting her hair down and puts the old ways her family followed (Never leave the cave! New is always bad; never not be afraid) behind her. She also starts to fight with Grug and tells him to stop being such a drag. 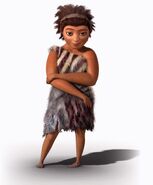 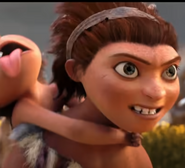 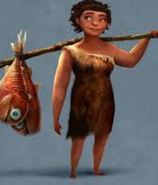 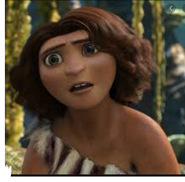 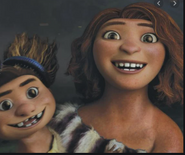 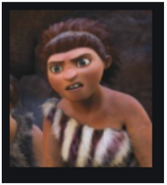